Durian may be the King of Fruits but 24 hours a day?


I've had just enough time to...   enjoy a feast of durians! 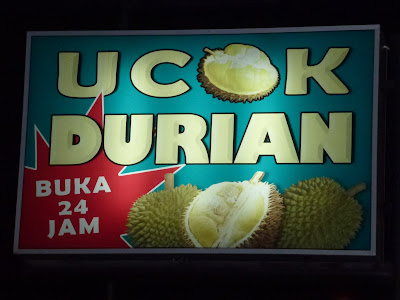 Much had been said and written about Durian, the undisputed King of Fruits and arguably the best fruits in the world are to be found in Malaysia with exotic varieties such as “Red Prawn”, “Water Gourd”, “Little Red”, “Green Skin”, “Red Heart”, “Khun Poh” (named after the grower), “Red Flesh”,  and “Red Flower”. As if these are not enough, we have even stranger names such as “Centipede”, “Coupling”, “Pork Fat”, “Bean Curd”, “Tiger Hill” and “Olive”. You have to agree that the naming of fruits is very creative and there are reasons for the names which I will leave it for you to figure it out. By the way most of these are names are translated from the Hokkien dialect which is just the way most of the fruits are named.

There are also the less creative names usually headed by a “D” alphabet which obviously stands for durian. Whereas durian itself comes from the Malay word “duri” meaning “thorns” which ineffectively protects the fruits from our greedy hands. But they do exact their revenge for which of us had not cut our fingers from a careless slip? As far as I know there are D numbers from D11 to D700!

But the most creative name may be “Lin Fong Jiao” named after the beautiful romantic actress of the 70s who won a Golden Horse Awards for her role in “Story of A Small Town” (小城故事) and the wife of Jackie Chan. The taste is said to be reflective of their bitter sweet husband and wife relationship. However, the King of the Kings is claimed by many to be “Raja Kunyit” or “King Tumeric”. This Malay name however got strangely translated into Cantonese as “Mao Sang Wong” or “Mountain King Cat”. The Hokkien however chose a more direct approach and called it “Boh Tang Pii” or “No Comparison”. So a durian by any other name is not THE Durian! 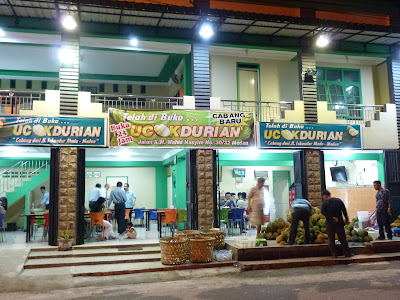 Found this 24 hours durian shop in Medan, Indonesia late one night after dinner.

Malaysians may have justification to claim their durians as “World Best” but even they do not eat them 24/7. That honor goes to the Indonesians. I’ve known of 24 hours clinic and even 24 hours workshop but it is the first time I came across a 24 hours durian shop! I found it not in a small dingy hawker stall but in a brightly lighted 4 double-storey shop lots that caters to durian aficionado round the clock. So if you have difficulty to sleep and fancy durian for supper, get on a bike and head to this durian paradise. But before you rush there, those who had not tasted durian before, beware! It is said to taste like heaven but smell like hell. But of course to us durian connoisseur, it taste like heaven and smell like heaven too! Unless you burp.