I've had just enough time to...  try to foil the Minions domination of the world. 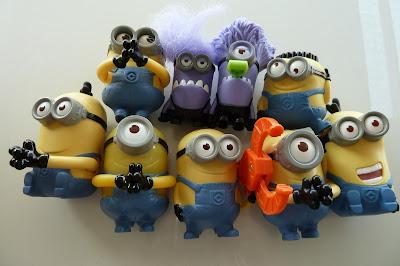 The 9 Minions that invaded Malaysia...

There is a despicable plot going on. And it is worse than World War Z – worse than the hungry zombies. After all, the zombies only bite. But Minions do worse! They turned you into giggling idiots singing bananana and potatos! They made you listened to a language you do not understand but laughed at hideously anyway. No one understands how they did it but world leaders are seriously discussing a global wide immunization or even lobotomy as a last stand against this insidious infestation. 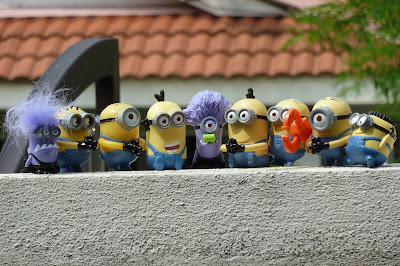 And the Minions are doing it through the assistance of diabolical McDonald entering homes unsuspectingly through the happy meal. There have been reported cases of madness and fights in every McD outlets in Malaysia where the most serious cases of Minion Mania in the world were observed to occur. It has been speculated that the “Kiasu” (“scared to lose”) syndrome of the average Malaysian must have made them especially susceptible to the Minions attacks. It was reported that a lunatic bid of RM38 millions for a set of the minions was made in ebay.

This is an emergency announcement. Up to now, it has been confirmed that 9 “species” of Minions have been sighted in the country. They are all highly dangerous. Do Not, I repeat Do Not tackle them on your own, do not own them, do not bring them into your house. Shut your ears and eyes and run away as fast as you can if you come across one. Our Special Intelligent sent out this warning regarding these dangerous “creatures” among us. They are –

Stop giggling. You have been warned!
Posted by Thou San at 23:31