I've had just enough time...   to remember the little boy kicking the ball in the street 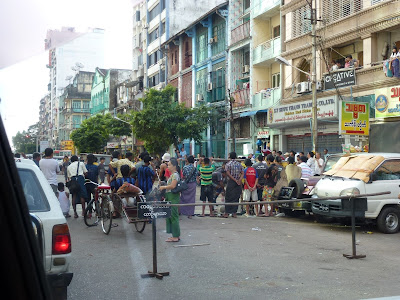 These images are drive-by shootings. I was in a car in Yangon Myanmar, squeezing through the crowded streets where old cars (government policy only allows import of second hand cars) shared the same space with bicycles, trishaws and trucks. Thankfully, there were no motor-bikes which are banned in the street of Yangon for the cars are confusing enough with right-handed drives and left-handed drives sharing the same road moving in both directions. I saw a crowd occupying one part of the road next to the shoulder and wondered why they are gathered there. 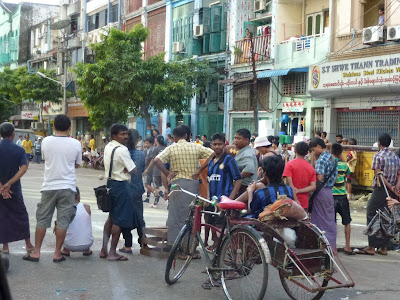 It seemed they are watching a game in progress. One guy obviously a player himself by his uniform is sitting on a trishaw with his knee up watching the game even though other spectators were blocking his view. There were spectators watching from the balconies and windows of the shop block. Some of the spectators were wearing trousers while more are wearing sarongs but all non-players were wearing flip-flops. This is street football, Myanmar style. 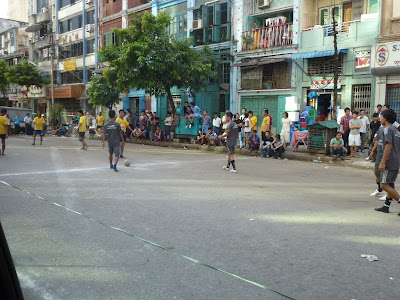 The curb marked one side of the ‘field’ while a raffle string that separated the road marked the outer boundary with crates and parked cars and trucks marked both ends. The ‘field’ itself is just the paved surface of the road with crude chalk markings. 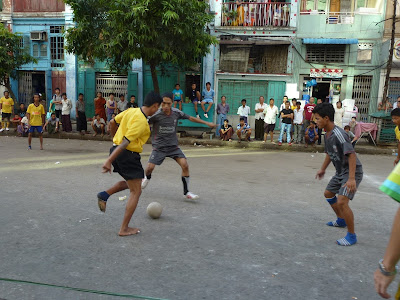 Please take note of the players’ footwear. The player challenging for the ball wore boots, the other defender wore socks with the big toe sticking out and a knee guard below the knee while the attacker was wearing an ankle guard on one leg. This seemed to be a good representation of the footwears of the players. 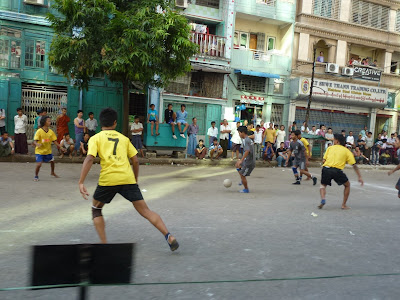 The game was proceeding at a lively pace with the ball moved up and down the court with each side trying to take it to the scoring zone where a tiny and low goalpost sat at each end. Imagine raw feet charging on the hot, rough, and abrasive road surface and you will wince. But this does not shock me as much as bringing back nostalgic memories for that was precisely what we did too as kids. And the way to differentiate the teams then was always, those with shirts and those without and we always hoped we will be the shirtless team so they won’t turn up torn.  I so wanted to stop and watched the game but the car was moving on…