Farewell To My Concubine Part II - The Song of Gaixia (垓下之战)


I've had just enough time to...   lament the suicide of the concubine 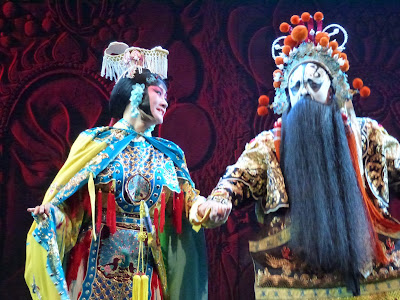 Taken of the "Farewell to My Concubine" opera show in Beijing

Xiang Yu, the King of Chu is in a desperate situation. Trapped and surrounded by enemies with superior forces on all sides, he is losing hope for the first time since he took up arms. The "Chu Song from Four Sides" (四面楚歌) employed by their enemies reminded them of home, sapped their remaining spirit and caused defection. But his faithful horse and favourite concubine refused to leave his side. He lamented with this song –

力拔山兮气盖世。 Once, my unparallel spirit lifted the hills
时不利兮骓不逝。 But the time is against me and my horse would not
leave me
骓不逝兮可奈何!    If my horse would not leave me, what can I do?
虞兮虞兮奈若何!    Oh, my precious Yu, what fate will befall thee? 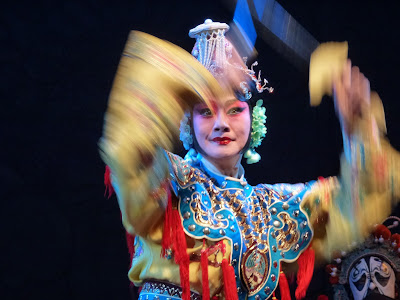 Lady Yu begged to die by his side but Xiang Yu strongly refused. She tried to lift his spirit by drinking with him and performed the sword dance for him and sang -

汉兵已略地,     The Han army has invaded our land
四面楚歌声。  We are surrounded by Chu songs from all sides
大王义气尽,     My king's spirit is broken
贱妾何聊生      What reasons have I to live? 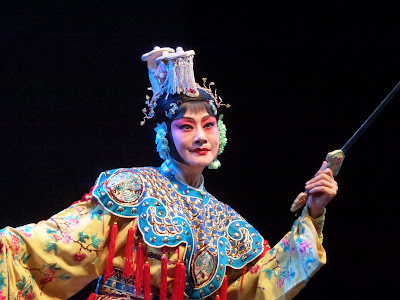 This role is traditionally played by a male

She blamed herself for the predicament her king is in and felt responsible for the downfall of the Chu dynasty. When Xiang Yu’s attention was distracted, she committed suicide by slitting her throat further breaking Xiang Yu’s spirit. She was only 16 when the king said farewell to his concubine.