Know A Country By Its Arts.

I've had just enough time to...  witness the change in the Chinese Art Scene. 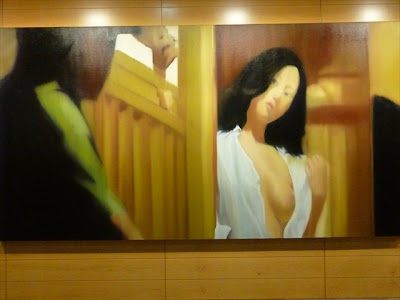 Taken by surprise in the Shanghai Pudong International Airport.


Contrast the previous painting (in the last post) done during the Mao Tze Dong era with this very large painting that I found in the arrival section of Shanghai Pudong International Airport. I have been in and out of China since the early 80s and what a change I had seen. From padi fields to high rise in a blink of an eye. From an universal grey to the latest French fashion. From a third world to one of the largest economy in the world. The speed and scale were mind-boggling.

Still it surprised me when I saw this painting in clear view just prior to the arrival hall. They will allow this suggestive painting in the airport? My friends from the West may think nothing of it. But most Asians are still conservative when it comes to nudity and suggestive portrayal in Arts. They have no problem if such paintings are displayed in studios and museums but have strong reservation when they are shown in public places in full views of children and their grandparents. And what can be more public than an airport?

China has come a long way in the last twenty years. How far? This tale of two paintings show the quantum leap.