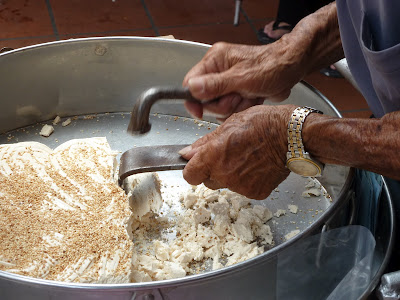 
We heard him before we saw him. “Kok Kok! Kok Kok!” We rushed out of the house to the back lane to greet the arrival of the Candy Man.

Riding somewhat unsteadily in his old bicycle, the old man weaved his way to where his young customers were eagerly waiting. He usually arrived in late afternoon but the days when he arrived did not fit any regular pattern. Maybe it was because in those days, only the children of the rich has pocket money and if he came around too regularly, there will not be enough paying customers. He needed to space out his visits for them to save enough dimes to pay for his sweet. 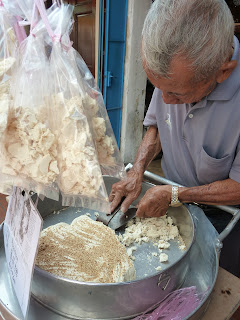 When he got off his bicycle and parked it, the cover of a large round aluminium tray secured at the back was lifted displaying a single large piece of candy filling almost the whole tray except for those edges that had been chipped away. With two pieces of metal, he will strike the one shaped like a wedge with the other that looked like a hammer producing sharp metallic sound “kok kok! Kok kok!” Even those of us who could not afford to buy will crowd round him to watch. Sometimes, one of our richer friends may give us a small piece and make our day. But more often, we were taunted and had to swallow our saliva instead.

The candy man disappeared from the scene as the country modernised. We thought him extinct for a long while. But there is a revival of interests in traditional snacks and we found him again after all these years. And every time I hear that “kok kok” sound, it reminded me of my youth in a bitter sweet way.