A Stranger Through The Eyes of A Child.

I've had just enough time to...   see myself in the eyes of a child. 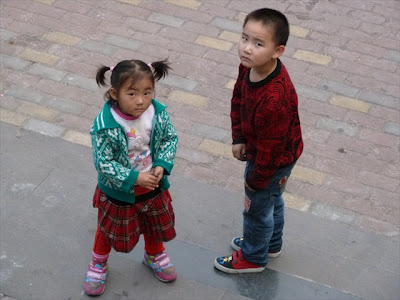 Taken in Kunshan while wandering around

She could not figure me out yet. So she was hesitant with her response. Maybe she will smile if I say a kind word or two. Maybe she will run away. But I kept my distance. I have no right to intrude.

Her brother, he just glared at me. I am a stranger. I can be up to no good. I cannot do anything for them except getting them into trouble. So he challenged me with his look. If I put on a fierce expression. Maybe he will run away. Maybe he will call for his family. I am after all a stranger and an outsider. So I kept my distance. Smiled, and backed off. I am after all an intruder into their world and I have to respect that. (I was in Kunshan with a couple of hours to kill and I’m not going to do that watching TV in the hotel room. So I wandered out into the street where ordinary people lived.) 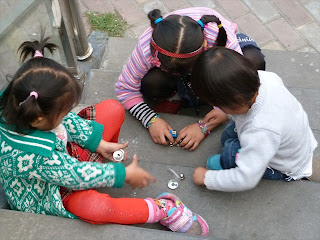 Earlier, I “caught” them playing with the stainless steel bolts and washers that they somehow dismantle from the railings of the steps and overhead bridge. I tried one with my bare fingers and found it to be fast secured. Maybe, they have found all the loose ones or maybe they did it with some tools though I did not see any. If they construct the railings so poorly that children can dismantle them, then it is not the children’s fault for you can expect a child to do exactly what they did. I did not want to encourage them though so I checked my smile and moved away wondering what did I learn from this encounter to have it so strongly registered in my memory.