The Hooded Cyclist on a Green Bicycle in Downtown Surabaya

I've had just enough time...   to have an encounter with the hooded rider of a green bicycle 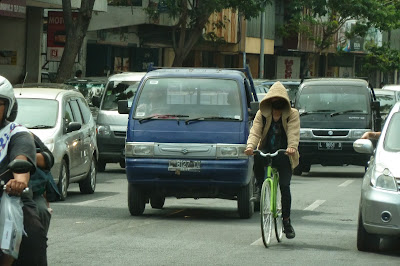 In the busy street of Surabaya
Competing with trucks and cars
A thick hooded cyclist
On a green bicycle emerged
Face masked against
Spurting fumes of
Noisy vehicles all around
Who is he?
What are his thoughts
What makes him what he is?
I would have run after him for answers
But I was not, and he disappeared
Into the traffic leaving questions
Hanging like smoke in the polluted air 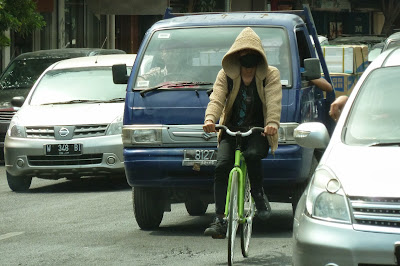 I was in a car squeezing through the afternoon traffic in downtown Surabaya when from nowhere I noticed a hooded cyclist. That is very rare in a tropical country especially it is made of thick clothes as the one he wore. Must be very hot and sweaty under that. With the hood and the mask he wore, one cannot even make out his features. His attire is different from the locals and he wore heavy boots and rode a green bicycle. With the cars moving slowing due to the congestion, he whizzed through the traffic and disappeared in front of us. He is very interesting and I found I wanted to know more regarding this strange character. So if anyone recognized this hooded cyclist of Surabaya, be sure to drop me a line and satisfy this itch-like curiosity.