Thoughts on Dying and Death.

I've had just enough time to...   mourn the passing of a friend 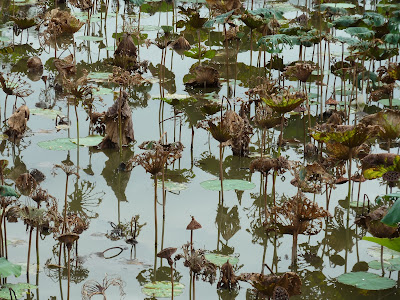 Last night (this was written before my trip and posted after) I attended the funeral of one of my friend’s mother. We who were a closely knitted group during high school, now meet as a group only on weddings and funerals. I was the youngest and had left the group though some members still meet regularly for badminton and suppers twice a week. Thus, I have not much to add to the free-flowing conversations but listened with interests. They are good friends but I was always sort of an outsider within, then and now. The trouble was and is with me - a loner of thoughts, a dreamer, impractical and more than a little odd. They on the other hand were regular guys out for a good time, uncomplicated.

Our conversation was not a happy one that night. Not because of the passing of our friend’s mother. Most of us in the group treated death quite casually. The aged have lived their life. They died. It is meant to be. There is nothing particularly sad about it. Death is accepted with resignation, more than sorrow. We may recalled some episodes that involved the dead, felt a few tucks at the heart but generally accepted that death is inevitable and that dragging on just create suffering all round. In this, we are surprisingly similar in thoughts and feelings. Thus, there is very little sadness felt in the funerals we attended of the aged.

We were sad that night because our conversation is not about the dead but the dying and it concerned one of our gang. We learned that one of us did not make it that night because he is terminally ill in hospital with pancreatic cancer, last stage.  Four chemos in a month, the unbearable pain, the despair. In the end, it did not make a difference. He is dying. Why are we talking like he is a piece of bad news? Why are we not feeling it like a blow that floored us? Why are we not on the floor? 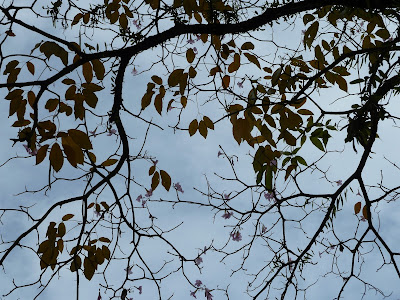 Many leaves and flowers have fallen leaving the branches bare...

So many memories. More of his idiosyncrasies than his virtues. More of his embarrassing behaviors than the quiet conversations we had. It made me sad that I did not express any of this to my friends. Why didn’t I? Is it because grief is a very private matter and cuts too close to share it honestly without devaluing the purity of the emotion? Maybe my friends are feeling the same but they are not showing it either. I asked his brother-in-law how was his emotional state. The answer pained me and I wonder (not for the first time) how I would feel if it is me.

One friend remarked that if I wanted to see him, I should visit soon. Again, the thought what I would want if I were him circled like vultures over my head. I know I would hope for a dignified death but if I cannot have that, I would not want others (including my friends) seeing me in a pitiful wasted condition suffering from pain from which they are helpless to release me from. I would not want that. I think it will make me feel worse if my friends visit me. But then, that is me. How would he think? What would he think of me as a friend for not even coming to say the last farewell? What would my other friends think, all of whom will do what most will do? Because they are my friends, what they think of me do matters but should I do what is expected of me or do what feels right? There is no right or wrong, that much I know. But do I follow my heart and my thoughts of doing what is best for my friend or what is best for me? I know if I did not see him before my trip to China, I will probably not see him again after my return.

On my first day in China, I received a text message informing me of his passing...