The Cheerful Boatman of West Lake.

I've has just enough time to...   take a boat ride on West Lake. 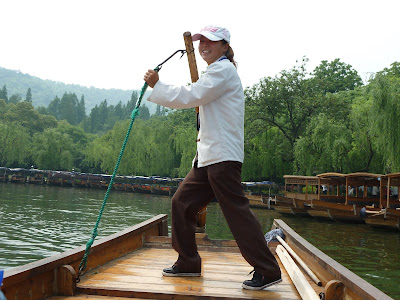 Taken of my cheerful boatman of West Lake

It was my fortune to hire this cheerful boatman to take me on a tour of the romantic West Lake. She effortlessly pushed the heavy oar and gently swayed with the rocking of the boat wearing a perpetual smile on her face. And in a sing-song voice, she narrated the romance of The Scholar and The White Snake. 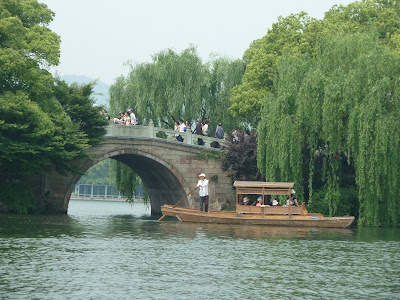 One of the lovely view of the lake.

Through her words, I imagined the scholar walking under the weeping willow meeting Lady White Snake and falling in love with her. How the strict monk seeking to uphold the Law of Heaven forbade the union of man and spirit and drove them apart. And when he could not severe their love for each other, imprisoned her under the Pagoda for eternity. A tragic but beautiful love story. So if you go to the West Lake of Hangzhou, hired one of the boatman for this is the best way to view the lake and hopefully, you will get a boatman as pretty and as cheerful as the boatman who showed me West Lake.

This animation film by Yun Tin Ruan, a famous comic artist in China give a slightly different take. It tells of White Snake practising for 1000 years to be a perfect woman. She falls in love with a man by Hangzhou's West Lake but the man's distrust eventually kills their love. The tale is used as a metaphor for the relationship between man and woman in a male dominated society. Watch it - the animation is fantastic!